I have a problem, you need to help me…  I can’t stop playing Oxygen Not Included.  It’s a game where you start playing, have a goal in mind, then three hours later you’re wondering why it has got so dark around you and where everyone else has gone.

It has a wonderfully simple premise, you control some mini-mes (duplicants the game calls them), get them to perform tasks to build up a base and survive.  Fifty hours later you have thirty two “dupes”, a power grid, an oxygen generation system, you’re producing plastic, petroleum and have just fired a rocket into space using steam power.  And oh yes, you better call an ambulance because you haven’t moved in those fifty hours and are starving, dehydrated and sitting in a pool of your own filth.

I kid of course, but there is no denying that the game is so damn moreish.  It’s like eating a giant chocolate bar that tastes better the more you eat.

There have been times where I’ve paused the game for an hour and planned out my next move.  I then enact my grand plan only to find it was fundamentally flawed and need to start again, but the rewards when things go right are immense.

This is how things look at the start of the game:

And here’s one of my bases when it has been fully developed: 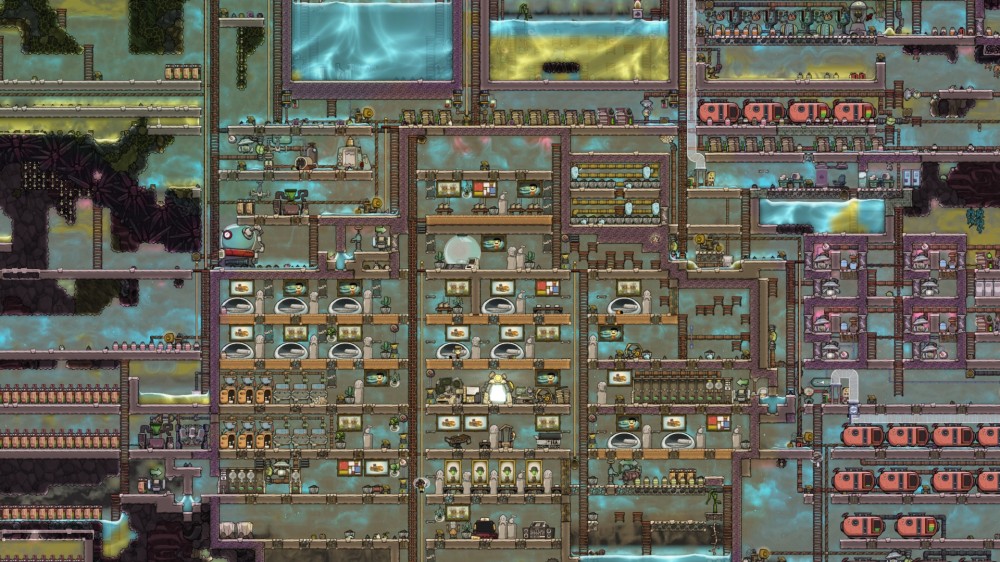 At the start of the game you are plonked into the middle of the map with only a duplicant “printing press” (periodically new dupes are available for you to add to your roster), three starting dupes and a box of food.  By digging out various parts of the map you gain different resources, things like sandstone, copper and algae.  You use these raw materials to make items that are unlocked through research.  In turn you can refine these raw materials into other materials.  Eventually you can make steel or refine petroleum from oil.  In the late game you can create exotic materials like super coolant or “thermium” that can be used to make liquid oxygen and liquid hydrogen.

But here’s the thing, there is no right way to do any of these things.  Early on you need to start producing oxygen, it’s not included don’t you know (yeah it’s a Dad joke sue me), but there are many ways to actually do this.  Do you use an electrolyzer and split the water into hydrogen and oxygen then use the hydrogen to power the electrolyzer?  Or do you use an Algae Distiller to distill slime into algae which is then used in an Oxygen Diffuser or Algae Terrarium to produce oxygen?  Or do you get polluted water from your lavatories, showers, Algae Distiller and Petroleum Generator, pipe it into a Water Sieve then put the cleaned water into an electrolyzer?  The choice is yours but whatever solution you go with, it probably won’t be the solution you use later in the game.

An ever evolving base

The best thing for me about Oxygen Not Included is that your base evolves and changes over time.  A solution that was good at cycle 50 (a cycle is a day in the game) may not be suitable at cycle 200, or even cycle 500.  There may be many reasons for this, perhaps you want to better use your dwindling resources or you need more room or you just have more dupes and need a bigger or more efficient system.  You are constantly making choices and constantly making trade-offs, you are constantly planning and constantly thinking.  It’s why I love the game and why it’s a game so deep I could drown in it.

View all posts by Gary Bentley

This site uses Akismet to reduce spam. Learn how your comment data is processed.